Gus was our first Potcake, initially named Angus. We owned a Shiba Inu named Jackson in our beginning trips to the Bahamas who usually didn’t like other dogs but became a great friend to Gus. After being homeless for four years, we decided to have Gus become a part of our family.

Gus learned to survive all of those years by wandering the neighborhood for handouts and scavenging the bushes for food. He became a great family dog and quickly learned how to perform tricks for treats and was particularly good at playing dead. Gus loved to fish. It didn’t matter whether he was on a boat, standing in the water, or floating on a raft. He was always searching for the little minnows. We had to be careful with our bait because Gus would snatch them from the bait box when we weren’t looking. Gus was a great traveler and loved cars, planes, and our RV bus. Several times we caught him jumping into other people’s cars or trunks.

Rather than having a bridesmaid and best man, Gus and Jackson walked us down the dock at Kamalame Cay in the Bahamas, where we got married in 2010. Gus moved to Oregon with us in 2014 and lived a good 16 years of life.

Our signature sparkling wine is proudly named after Ginger Lee. Ginger often traveled the neighborhood with another dog named Becky. Ginger’s Bahamian family left for weeks during Christmas, leaving her by herself with her puppies and no food or water. Days later, I heard from friends that puppies were dropped off at different Villas in the middle of the night. I was sitting with my friend when Becky and another dog came walking up during this time. I asked my friend if she had seen that dog before and if I could pet her. She said, “She is the dog passing the puppies out. Yes, you can pet her, but gingerly.” I was shocked. I thought it was a person leaving the puppies at the Villas. And then, one day, she dropped off two male puppies at our house! We kept one and named him Junior.  The other puppy went to a home in Florida called Cayman. We also found another two of Ginger’s female puppies that went to Colorado. A few months went by as we were on and off the island, and Ginger would still come by and check in. We were about to depart for a several-month trip to many states, including Alaska. I looked into her eyes and decided she was going to join us. The rest is history! 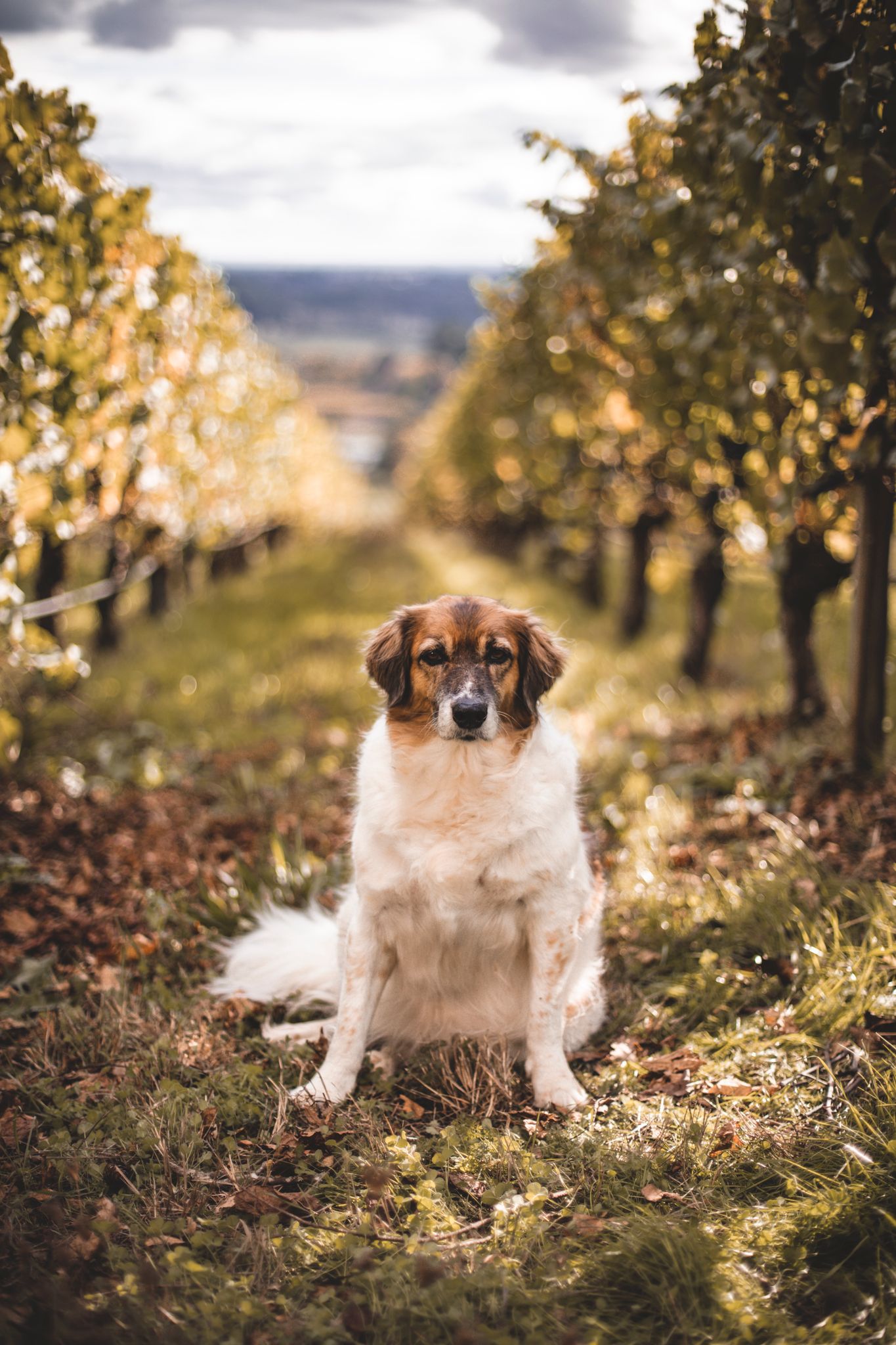 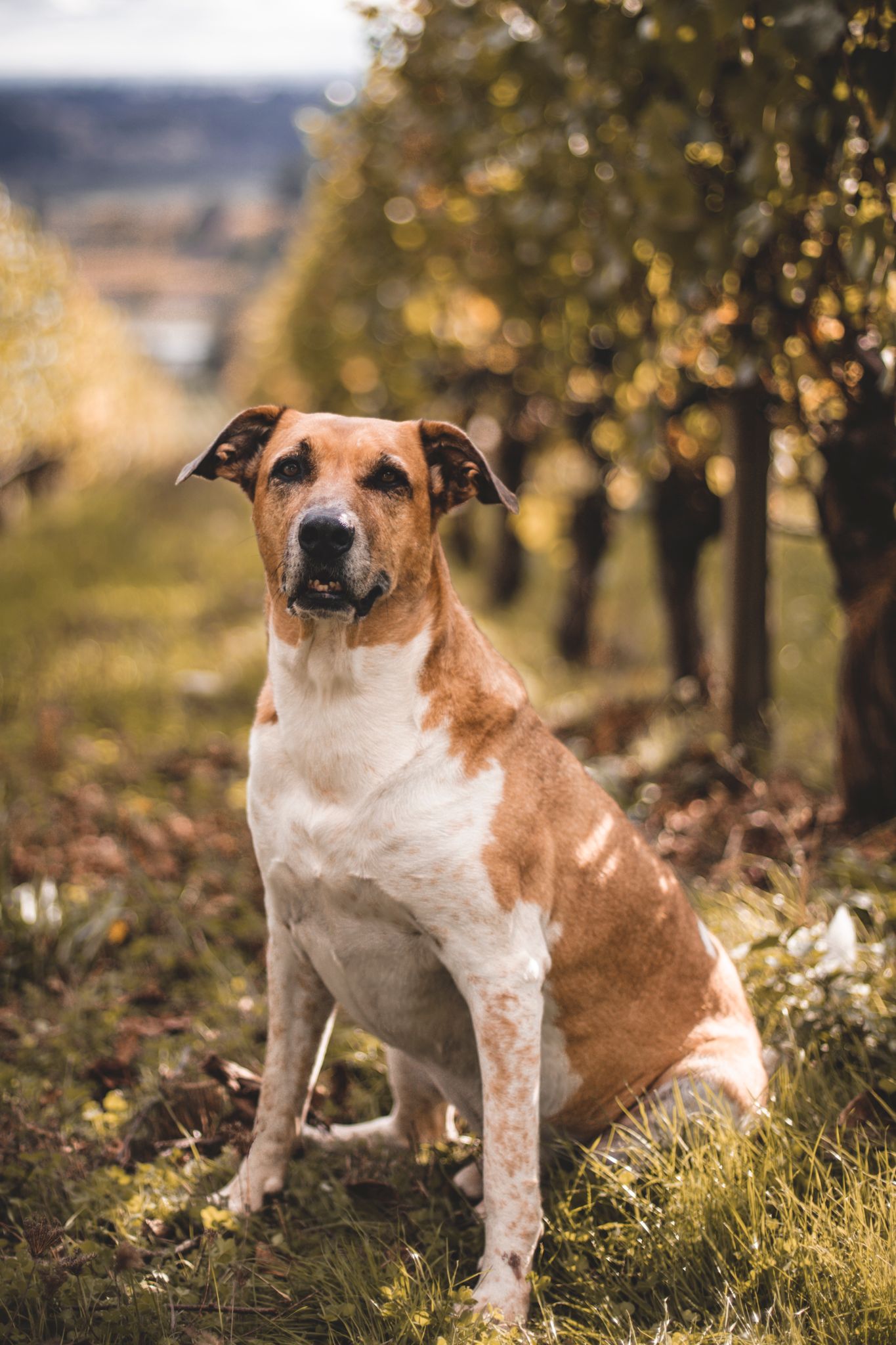 Junior is the son of Ginger Lee. He was about six weeks old and 3 pounds when his mom dropped him at our front door. Even though he wasn’t, I secretly convinced my husband that Junior was such an ugly puppy that we should keep, and it worked! Now Junior is handsome, healthy, 85 pounds, and ten years old.  He has learned to fish from Gus. While in the Bahamas, Junior looks forward to fishing the shallow waters. In Oregon, he loves digging for gophers and inspecting the grapes during walks in the vineyard. We call him the grape inspector. He sniffs the grapes and takes a few when they are sweet. He loves to travel like Gus, but he doesn’t get into strangers’ cars! His favorite foods are conch, lobster, crab, and ham. He is still playful and will always be our first baby boy Potcake.

Otis was rescued after Category 5 Hurricane Mathew in 2016.  Our caretaker saved him, his sister, and his brother in Lowe Sound on North Andros, Bahamas, just before the hurricane blew through, destroying most homes. We were in Oregon watching the category 5 hurricane on the weather channel as it made landfall on our island. When the storm passed, we loaded our plane, picked up another girl in Texas that wanted to help, and headed to Florida for supplies. When we arrived, we gave food and medical attention to these three tiny puppies. After making several trips back and forth with chainsaws, tarps, supplies, and food to help aid the locals, we headed back to Oregon. Otis wasn’t doing so well. He was one pound and so sick that he could not eat. He had to receive an IV daily, be force-fed, and have him sleep in our bed at night. He slept on Roy’s neck every night for the first week. After careful nurturing, Otis, his sister named Rizzo, and his brother named Rocco were finally healthy. When I asked my husband if we could keep Otis, he said, “I would not be allowed to foster anymore if I couldn’t give him up.” Well, guess who ended up wanting to keep him? And, he still sleeps in our bed! 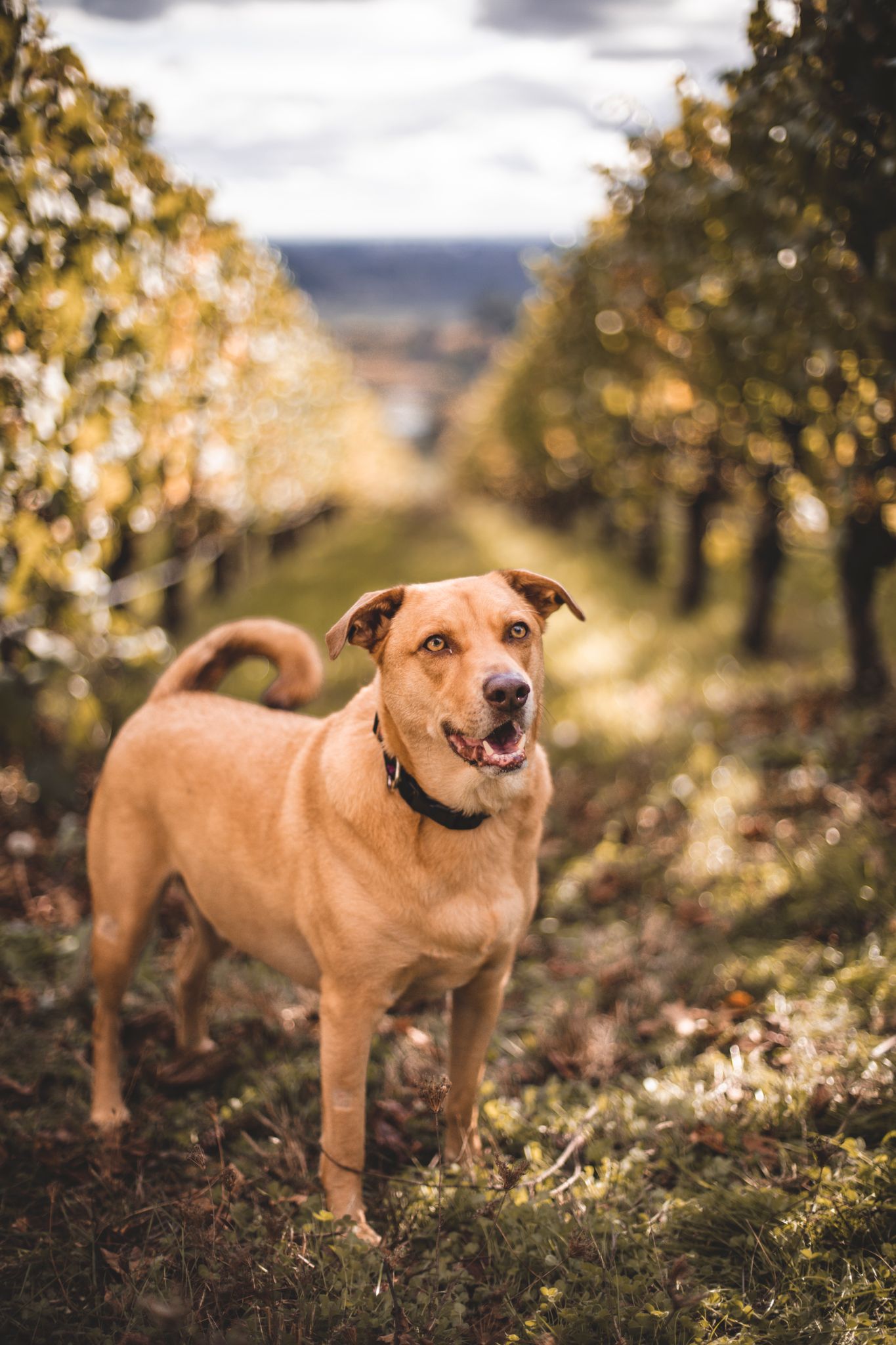 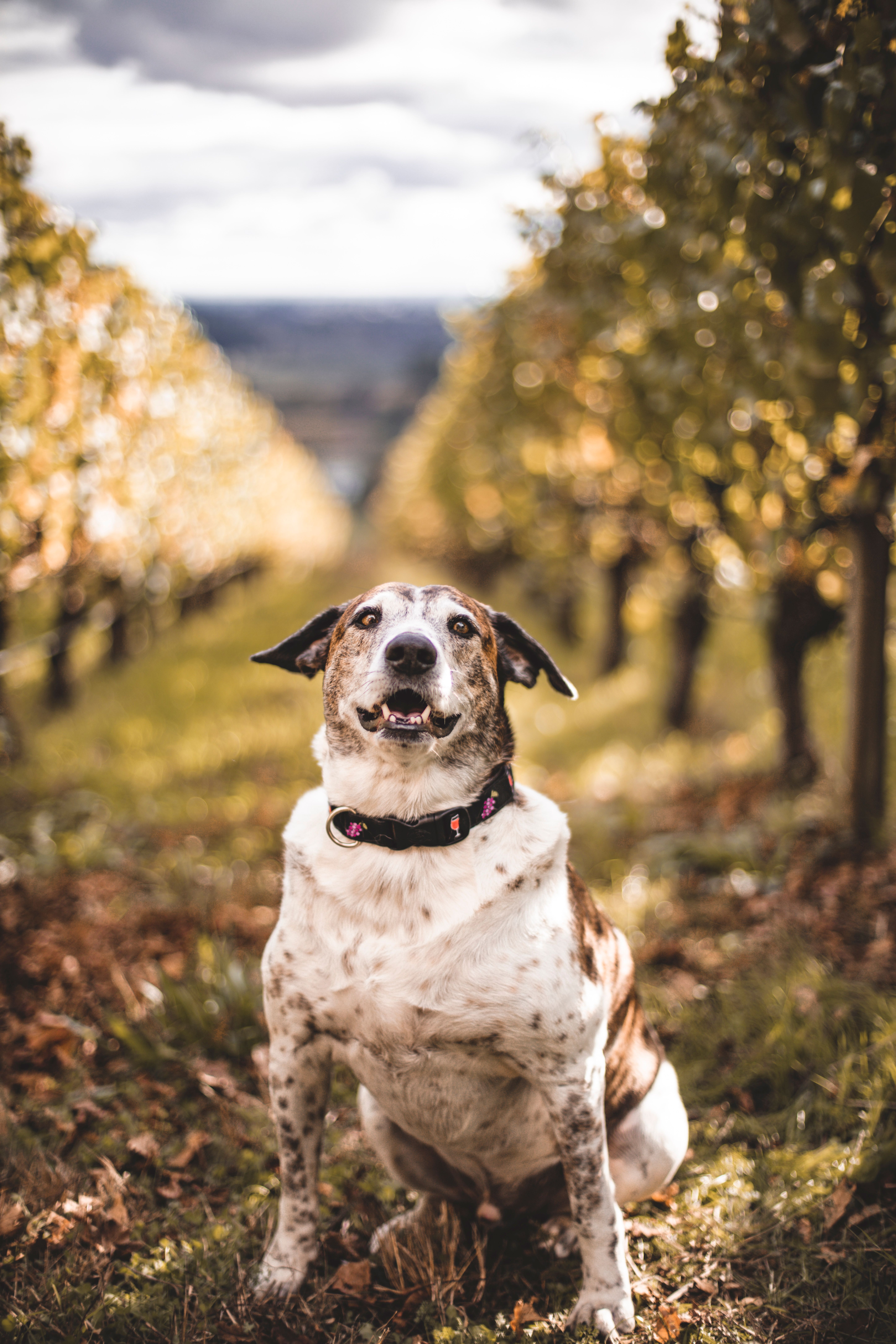 We rescued Elvis in July of 2014.  We had seen him down the street since he was a puppy.  We had fostered a dog named Sampson when the owner left the island for six months. Unfortunately, that Sampson died, and the owner called his next dog Sampson. Now named Elvis, he consistently came to our gate begging for food during his young life living on the island. We would watch him play by himself on the beach. He loved coconuts as a chew toy. Finally, a few nights before we were leaving for Oregon, I decided to bring him inside. He got along with all our other potcakes, and so we took him with us. While trying to find him a home, we decided to keep him. He is a very smiley boy that smiles on command or when he is being silly. He loves being inside any type of vehicle, whether it is moving or not. You can’t go a day without catching him on the couch getting a nap in. If you pet his back, he makes weird grunting growling sounds that sound scary, but that is how he expresses his happiness. He truly loves meeting people and jumps in the FedEx trucks when they arrive at the house. One time, a driver didn’t know he was in the truck and had to bring him back. He sure is silly!

In her earlier days, Peanut, known as Precious, lived with the same family as Ginger. The grandmother and her three grandchildren didn’t have electricity or water and lived in a small building near us. The grandchildren would come to us asking for chores to earn money and tried to care for the animals without having the means to care for themselves properly. The children and I learned we had a mutual love of caring for the animals and became friends. One day the boys came by with ﬁve puppies. We were getting ready to leave for Christmas. I told them I could take two of the puppies, but you will have to keep the other three.

We delivered these two pups to our daughter Jennifer who was living in Denver at the time. She kept “Ike” and found a home for “Stella.” They were the inspiration for her world-famous custom handmade dog collar manufacturer named ikeandstella.

Meanwhile, the kid’s family kept one out of the three pups and named her Precious. Grammy and the kids would occasionally stop by with her, and my husband would give her treats. Peanuts and American cheese were her favorites. Then, one day she came by on her own, in heat and super skinny. We decided to keep her isolated for a week until we could get her to Florida to see a vet. She had two blood transfusions before being spayed. After that, she became part of the pack and traveled with us everywhere. Peanut grew up to be a very loyal dog that listened well. She will always be remembered as the best mouse hunter in Oregon and crab catcher when in the Bahamas. 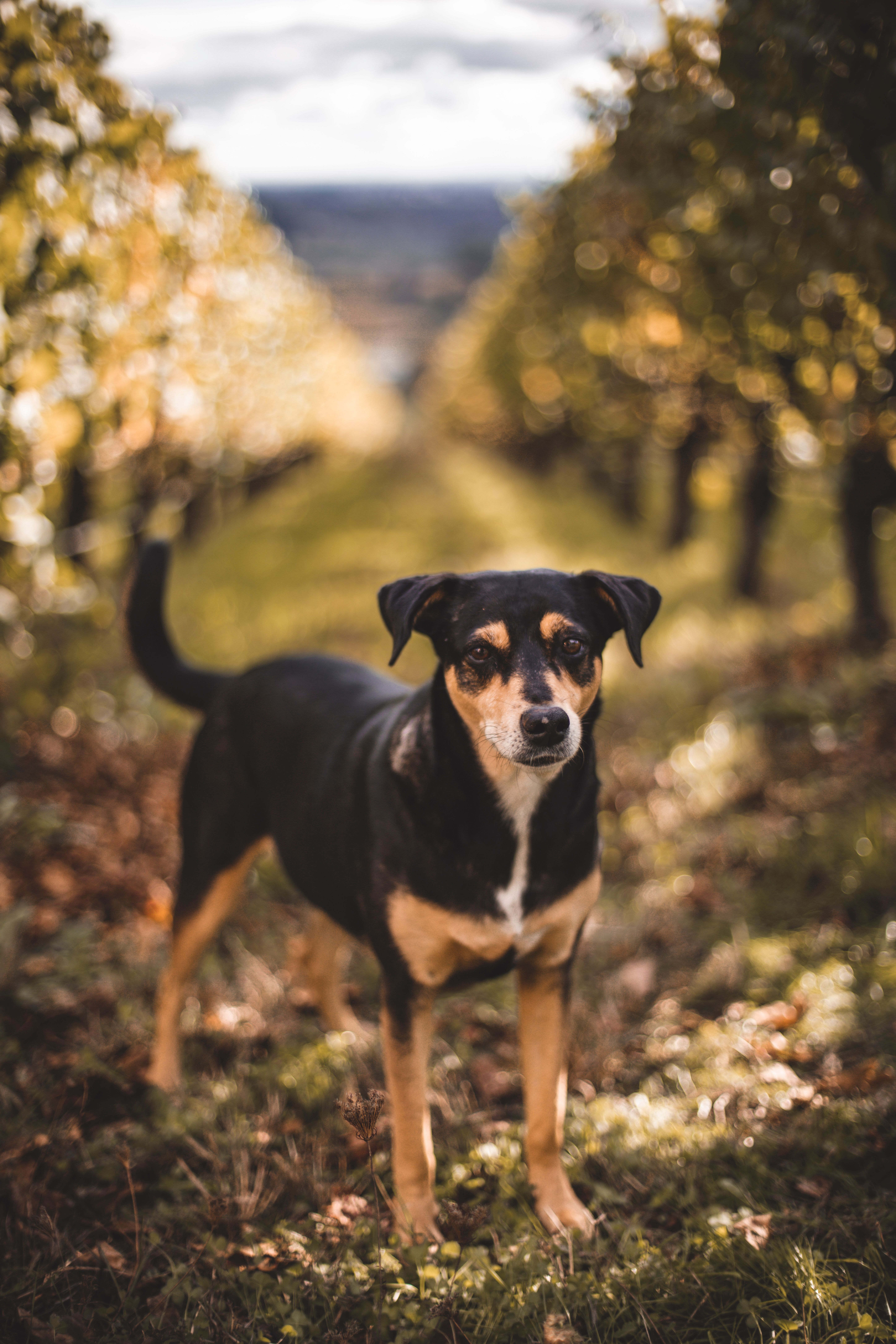 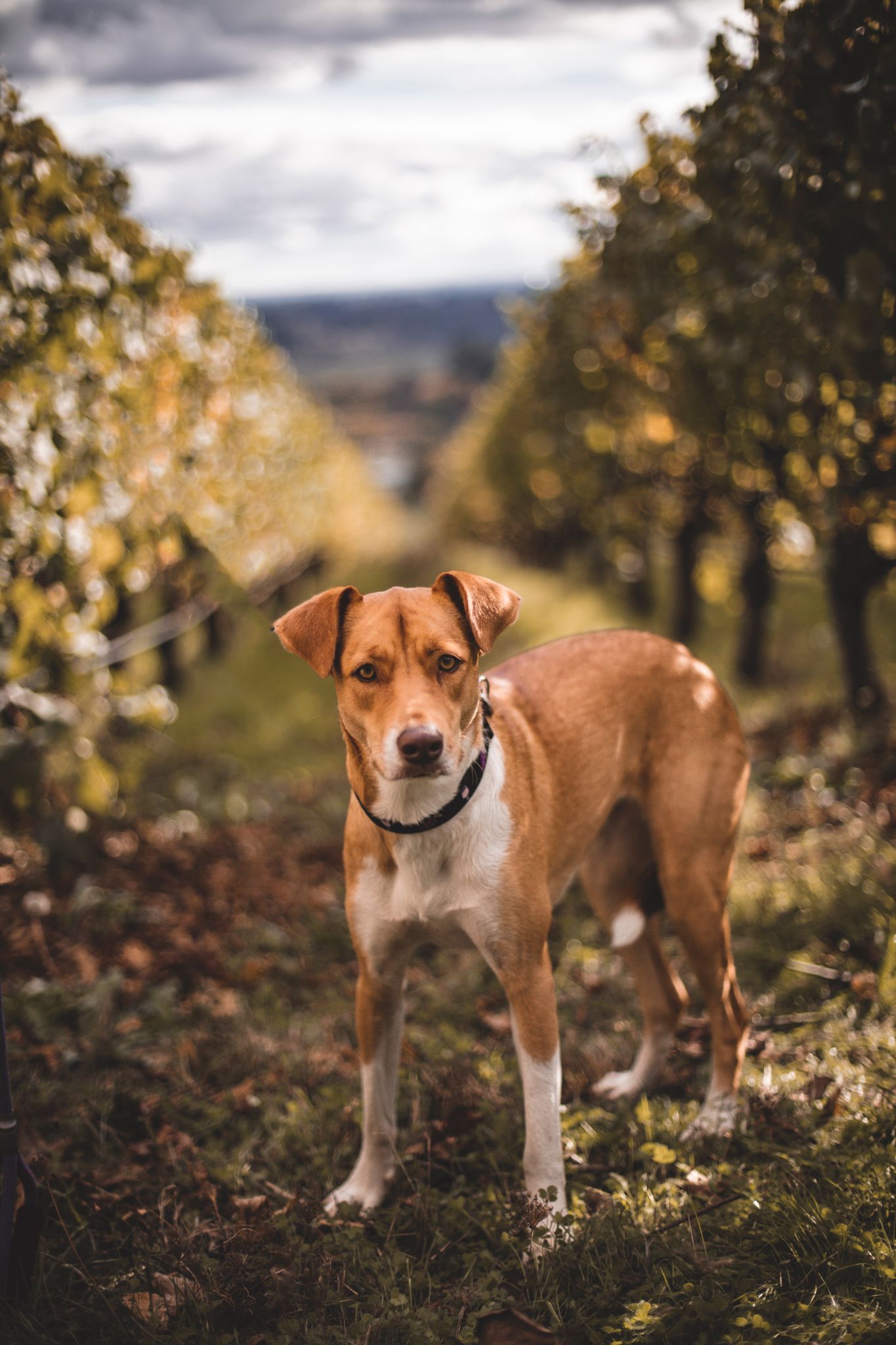 Spicy is one of three sisters we found in October of 2019. Spicy and her littermates were born in a dumpster. They lived in the bushes with their Momma near Morgan’s Bluff where the boats are docked. Spicy prefers to be alone and at times needs a break from her sister Oatmeal. She loves the foam from a latte, is a quick learner, and enjoys using those long legs to run and jump like a deer. I love my Spicy! Yes, another one to our family.

Oatmeal is Spicy’s sister that we rescued in 2019. The first time I saw her I was in love because she looked so much like Otis. Oatmeal is the smallest of litter and was picked on her a lot by her sisters. However, she loves the water, playing with other dogs, and has learned to fish from Junior. After a couple of years of overcoming fear, she has improved significantly and has learned many obedience skills. 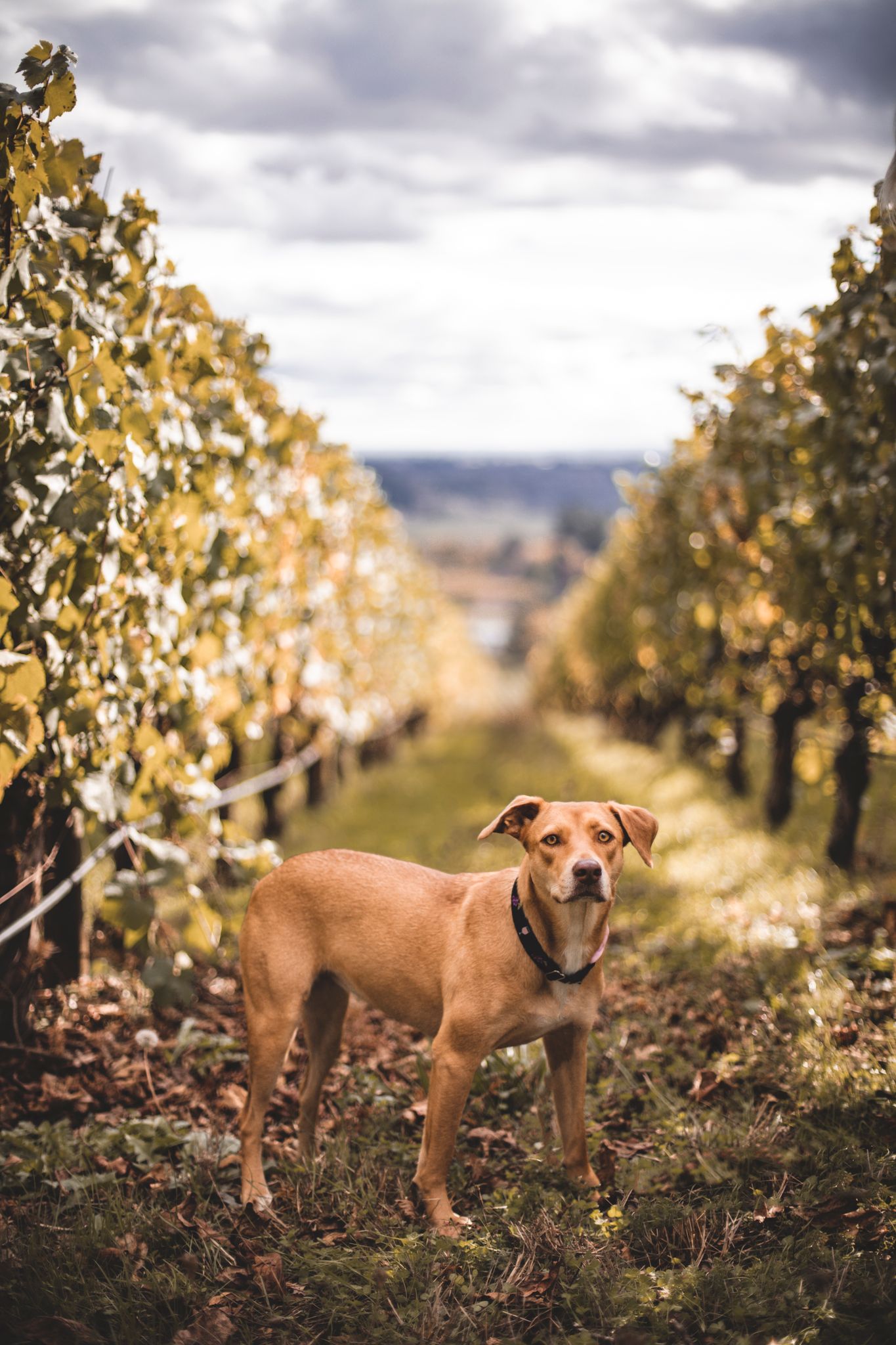 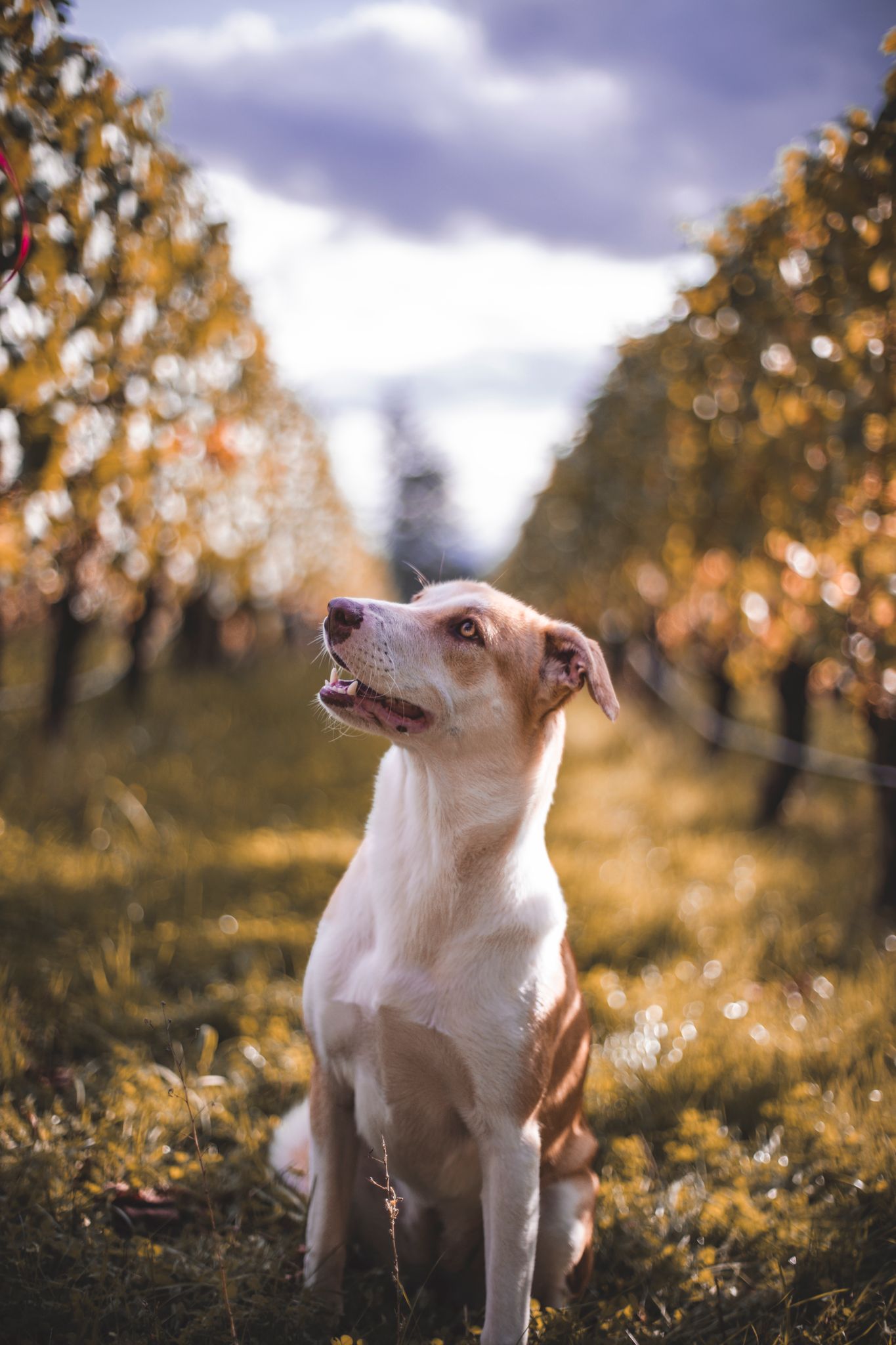 Sunday is the youngest of the pack. She came from a litter of 13 and is the best play companion for her “brother” Riley. She gets scared of new people, but she is a lover who gives lots of kisses when she knows you. She is excellent with commands and always comes when you call her name. Other than her love of playing with other dogs, she also loves food. Pretty much any type of chip will satisfy her. We think she enjoys the crunching more than the flavor!

Riley is a gentle and sweet little boy and always happy-go-lucky. He loves car rides, running as fast as possible, and enjoys spending as much time outside as he can. He is terrified of dog beds for some reason and prefers sleeping in the closet under hanging clothes. He is a quick learner but refuses to learn how to catch food no matter how many times it hits him in the face. He has been a great teacher for his “sister” Sunday in many aspects. They do everything together. 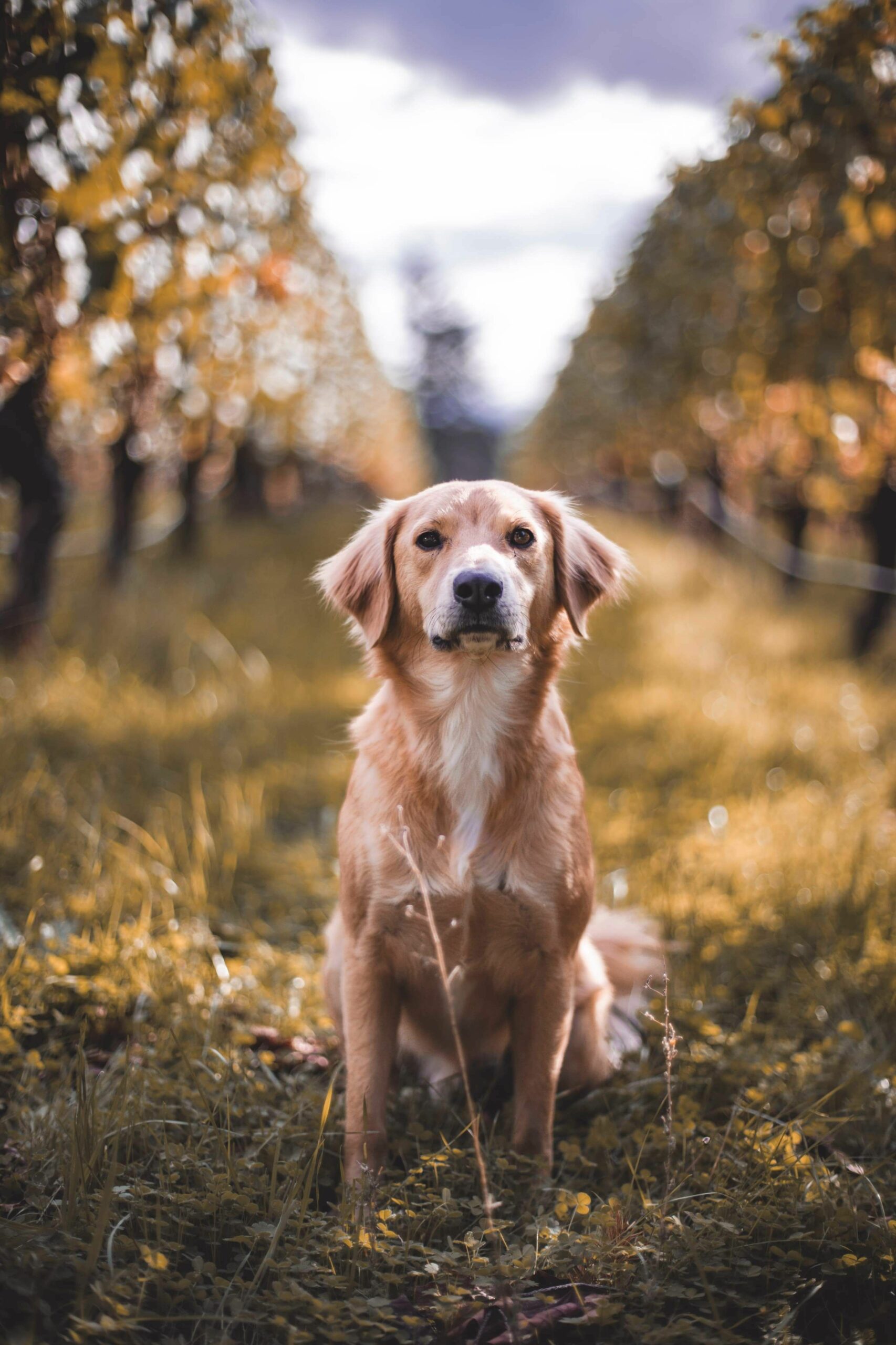